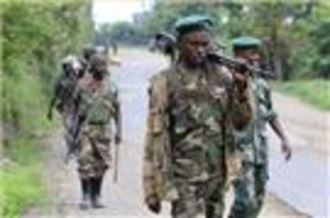 M23 rebels and the government of the Democratic Republic of Congo have suspended peace talks only days after the rebels spoke of "major breakthroughs".

The two sides have been meeting in Kampala, the capital of neighbouring Uganda, which is brokering the peace talks.

The suspension of talks on Monday comes just hours after UN envoys warned of the dangers if a deal was not agreed soon to end the year-and-a-half-old rebellion ravaging the Democratic Republic of Congo's volatile east.

Lambert Mende, the Congolese government spokesman, said the talks had been suspended because of disagreement over the extent of an amnesty for the M23 army mutineers and their reintegration into the national army.

Last Saturday M23 released a statement saying there had been "major breakthroughs" as a result of "the heavy involvement of the international community in the dialogue".

The rebels take their name from a peace agreement they signed with the DRC government on March 22 2009, paving the way for their integration into the national army, but they mutinied in April 2012 over poor salaries and living conditions, renewing an armed rebellion in the country's mineral-rich east.

Mende said Congolese Foreign Minister Raymond Tshibanda had returned home to Kinshasa, the capital, but added that his departure was "not definitive".

Sticking point
Roger Lumbala, an M23 delegate, said there was a "blockage" but insisted the rebels were ready to go back to the negotiating table any time.

"We have agreed on the content of 13 articles of a peace accord and two remain to be settled, concerning security measures," M23 delegation chief Rene Abandi told the AFP news agency, indicating that measures to take back rebels into the Congolese army were undecided.

Backed by the international community, DR Congo's government is refusing to give amnesty to about 80 leaders of the M23 and to enlist these men into military ranks.

A government official had earlier warned that the negotiations, which resumed in September under pressure from regional leaders, were "heading slowly but surely towards failure".

The UN special envoys issued a statement on Monday voicing concern over the lack of a comprehensive deal for the demobilisation of M23 rebels fighting in the mineral-rich but chronically unstable east.

"The envoys are concerned at the volatility in the region and hope that additional progress on the significant remaining issues can be made in the coming days," they said in a statement.

The UN and other special envoys, including from the European Union, the United States and the African Union, jointly urged both sides "to exert maximum restraint on the ground in order for the conclusion of their dialogue".

The M23, made up of Tutsi fighters with roots from neighbouring Rwanda, control an area of around 700 square kilometres (270 square miles) in the eastern North Kivu province, which borders Rwanda and Uganda.


On November 20 last year, the rebels seized the key provincial capital of Goma, a city of one million people, but withdrew in early in December under international pressure.

Posted by Thinking Africa at 11:20