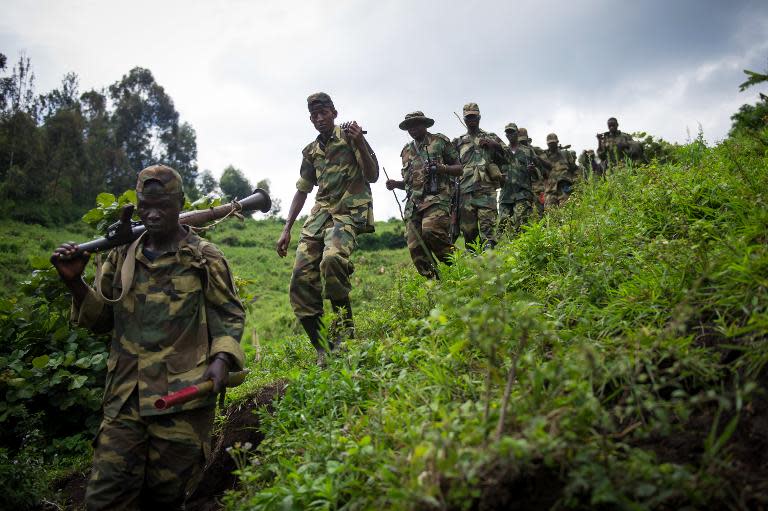 M23 rebels called an end to a 20-month insurgency in the mineral-rich east of the Democratic Republic of Congo on Tuesday after being driven from their strongholds by one of the most successful ever offensives carried out by the national army.

Congolese officials announced they had scattered the rebels from remaining hilltop redoubts after a night of intense fighting. The M23’s leader, Bertrand Bisimwa, then called on rebel units to prepare for “disarmament, demobilisation and reintegration on terms to be agreed with the government of Congo”. He said the movement would now pursue its fight through political channels.

The psychological significance of the moment was apparent in the capital, Kinshasa, where witnesses said onlookers were breaking into impromptu celebrations at the sight of passing soldiers, more often feared for their predatory behaviour. A huge billboard was erected near the city centre featuring a government soldier and the words ekolo ya makasi, or “something strong”.

Congo’s army has rarely been known for its strength: it has not claimed a significant victory on the nation’s many battlefields for as long as most Congolese can remember.

In the 17 years since the first of many rebel groups marshalled by neighbouring Rwanda began a campaign to overthrow the late dictator Mobutu Sese Seko on the same eastern terrain, soldiers in the ragtag national army have suffered defeat after defeat, most recently when M23 rebels over-ran the regional capital, Goma.


The inability, until now, of UN-backed efforts to rehabilitate a national army capable of establishing state authority has been central to broader failures to revive the fortunes of the giant nation that borders nine other African countries.

But the turnround over the past two weeks may be indicative of shifting regional and international dynamics as much as a resurgent Congolese army. Officials and analysts in the region caution that stability is still a long way off.

Eastern Congo hosts a plethora of other, mostly smaller, militias and rebel groups that thrive on the illegal exploitation of minerals, and the M23 insurgency is only the latest in a series of rebellions launched in the defence of ethnic Tutsi interests in the region.

“You must wait until evening to know that the day was good,” said a veteran Congo analyst commenting on the significance of the army’s recent victories.

These have come about, according to Congolese and other officials, partly as a result of restructuring, including the removal from the conflict zone of ageing and corrupt officers, and the involvement of fresher, better-equipped forces recently trained by the US, Belgium and China.

Backing from a new 3,000-strong intervention brigade, the FIB, made up of African troops fighting under a UN mandate, also appears to have been instrumental, together with a more robust military and political lead taken by the UN peacekeeping force, Monusco.

Perhaps as decisive, however, was the role of neighbouring Rwanda, which has persistently denied allegations by the Un and others that it helped foment the M23 rebellion to further its own security and economic interests in the region. Those denials have flown in the face of a strong body of evidence, and sustained regional and international pressure on President Paul Kagame’s government to halt cross border support appears to have paid off.

Rebel and Congolese officials have yet to agree on the final terms of a peace deal that could see some M23 fighters absorbed back into the national army. However, for once it is the Kinshasa government that has the stronger hand, following the success of the new collaboration between the army and the UN forces.


“It will . . . send an important message to the DRC’s neighbours, who have long taken advantage of the weakness of the Congolese army to interfere at will, that the FIB is a significant military presence that takes seriously its role of going after the armed groups,” said a report by South Africa’s Institute of Security Studies.
Posted by Thinking Africa at 10:37