DR Congo: we are all implicated in the carnage – we can no longer ignore it 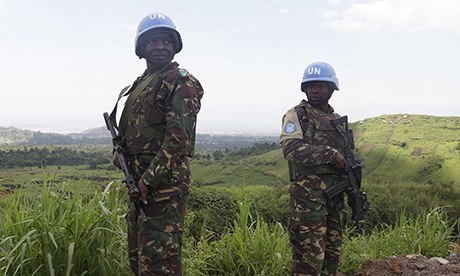 Denis Mukwege, the Congolese gynaecologist who treated thousands of rape victims during the war, is tipped to win the Nobel peace prize this week – ahead of Malala Yousafzai. Whatever the decision, his work – and the situation in the country – deserves global recognition.

Some of the horror stories I have heard from women rape victims have truly haunted me. Some of the women, after being raped, had chemicals poured into their inside. Others were shot apart by rifle blasts. One family friend's aunt, Masika Katsuva, was raped with her two daughters and then forced to eat her dead husband's genitals which had been cut off by the rebels.

For the past 15 years, Congo has been the scene of the bloodiest violence since the second world war. The conflict began in 1998 when Laurent Kabila – who, with the support of a loose assembly of regional armies, had forced Mobutu from power 15 months earlier – fell out with his original backers. Rwanda's Paul Kagame and Uganda's Yoweri Museveni, under the pretext of the enemy of my enemy is my friend, had enlisted Mobutu's military to reinvade Congo to topple Kabila. The invasion drew in Angola, Zimbabwe and Namibia on Congo's side, while Burundi lined up with Rwanda and Uganda, and set the stage for the tragedy that continues to the present day.

The human cost has been in the millions; and the cost in terms of social and human development is incalculable. More than 5 million perished in the first 10 years of the wars and an estimated 45,000 people continue to die each month.

Yet we rarely hear anything about it. Out of sight, out of mind. Though ironically Congo is actually never too far from us. We carry a piece of it with us every single day. One of the reasons the Congo wars have continued is the scramble for its highly valuable minerals. Congo is a home to some of the largest reserves of gold, tin, timber, diamond, copper, cobalt, tungsten and tantalum – to name but a few – in Africa. The most lucrative of all is columbite-tantalite, better known as coltan: a dull metallic ore that stores electricity and makes our mobile phones vibrate.

Political and military leaders in Kinshasa, Kampala and Kigali vying for access to, or control of, some of these minerals have been funding rival militia groups on ethnic lines and then leaving them to destroy one another, in a self-defeating but self-perpetuating effort to ensure their continued access to areas rich in minerals.

The result has been a chaotic, free-for-all country: some militia groups fighting each other, some fighting neighbouring governments from Congo, others fighting Congo on behalf of neighbouring governments, and others fighting Congo's central government, which they see as corrupt and incompetent. And rape, as much as bullets and machetes, has been their weapon of choice. The scale and scope of its use has been catastrophic. Warlords and militia groups (in and outside the Congolese/Rwandan army) have used rape with impunity to humiliate the local population into submission, punish communities suspected of disloyalty and to destroy or drive out families from rich mining areas. And their victims have raged from 80-year-old grandmothers to young girls – as well as boys and men.

The UN has deployed 20,000 peacekeepers – the largest such force in the world – costing around $1bn a year, to keep alive the hope of peace. However, the sheer size of the task they face, as Alan Doss – the former special representative of the UN secretary general to Congo – once explained, is nothing short of a mission impossible. Just four of Congo's most volatile provinces – North Kivu, South Kivu, Ituri and Katanga – cover an area three times the size of Germany, with only 35km of paved road and around 20 different rebel groups.

There is, however, a reason to be cautiously optimistic. Recent sanctions against Rwanda – notably the suspension of military aid and financial support – because of the country's continued backing for warlords and militia groups tyrannising Congo's eastern region – represent a change from the west's decade-long regional policy of "hear nothing, see nothing and do nothing".

But we must not lose sight of the real issue: the wars engulfing the Congo have many layers, but the chief reasons they continue almost unhindered is the crisis of leadership and legitimacy in Kinshasa. If there is one thing those of us on this side of the world can do to help change things in Congo, it must be to force change in the capital.
Posted by Thinking Africa at 13:46