Rebel retreat: Can the Congolese army build on a rare victory? 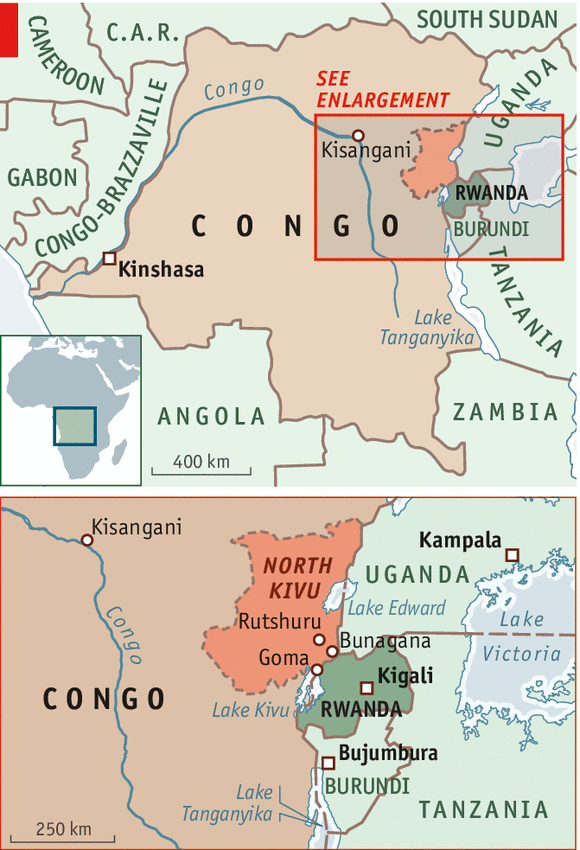 THE army of the Democratic Republic of Congo is not used to being feted with palm leaves. It is also unaccustomed to winning. Its men are better known for rape and pillage. But a snap offensive against rebels in the eastern province of North Kivu which began on October 25th brought a rare military victory.

“They fought well and they behaved well,” said a surprised observer of the troops, who were welcomed by cheering crowds in Rutshuru, the northernmost town they have reached. The government forces did not do it alone. They were helped by a strengthened UN “intervention brigade” and faced a demoralised foe. The M23 mutineers, named after the date of a failed past peace accord in March 2009, were crippled by in-fighting and in the past year by Rwanda’s reduction of the support it once gave.

The rebels, whom Rwanda still denies it backs, suffered heavy casualties on October 26th-27th, trying to defend their frontline positions north of the regional capital, Goma. Their leader, Sultani Makenga, with several wounded men in tow, headed first for Bunagana, an outpost that soon fell as well, and then possibly onwards to the nearby border with Uganda. Hundreds more are reported to have defected.

The UN’s bullish new special envoy, Martin Kobler, said the M23, which briefly occupied Goma last year, was finished as a military force. “The era of cohabitation between armed groups and the UN is over,” he told a local radio station.

Even supporters of the UN’s aggressive move from peacekeeping to peace-enforcement in eastern Congo admit that a political deal will also be required. Since 1994, repeated rebellions have flared among Congo’s Tutsi minority, who complain of being marginalised by the government in the capital, Kinshasa, and are often egged on by Paul Kagame, Rwanda’s Tutsi president. Past peace deals have largely bought off rebel commanders by giving them army posts while ignoring underlying complaints.

The M23 leaders have little incentive to cut a deal in talks which have dragged on in neighbouring Uganda. Their rank and file may be reintegrated into the army but Mr Makenga and others face possible war-crimes charges. Rwanda, for its part, has sounded as bellicose as ever. Its ambassador to the UN has been complaining of stray shells landing within its borders and has warned that its forces could yet invade its larger neighbour, as they have done before.


“Unless Rwanda gets on board with a definitive peace process, we’ll be back here in a year’s time,” says Michael Deibert, author of a recent book entitled “Congo: Between Hope and Despair”. But the lorry drivers who ply the volcanic roads of eastern Congo know how much even a temporary peace is worth: $300, the price they have been paying in tolls at rebel roadblocks in the past year.
Posted by Thinking Africa at 01:13