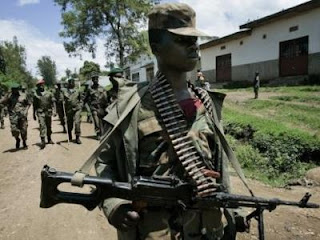 While the M23 rebellion has monopolised the headlines on eastern Democratic Republic of Congo (DRC) for over a year, a myriad of other armed groups also operate in the region.

They fight against the government or against other armed groups, in a series of often shifting alliances, and prey on the civilian population.

Here is a selection of some key forces:

M23: Army mutineers, for the most part Congolese Tutsi who speak the Rwandan language Kinyarwanda. Former rebels, they were integrated into the DRC army in 2009 but mutinied in April 2012, complaining that the peace deal had not been fully implemented. Kinshasa and the UN accuse the group of being backed by Rwanda and to a lesser extent by Uganda -- a charge denied by both Kigali and Kampala. M23 briefly seized and occupied Goma in November 2012 and recently resumed fighting against the Congolese army. The group's members have been fighting in the ranks of one force or another since the early 1990s. Estimating their number is difficult since an internal split resulted in many deaths and a wave of defections.

ALLIED DEMOCRATIC FORCES (ADF): Beginning as a group of Ugandan rebels opposed to the regime of President Yoweri Museveni, it has since also developed an Islamist agenda. Based in the Rwenzori mountains that straddle the Uganda/DR Congo border. Estimates as to their number vary from "several hundred to 1,300."

DEMOCRATIC FORCES FOR THE LIBERATION OF RWANDA (FDLR): Rwandan Hutu rebels
based in Congo since they fled Rwanda after the genocide in 1994. Their ranks have been swollen by youths recruited in DRC. Their avowed aim was -- and technically still is -- to overthrow the Rwandan government, but in recent years they have preyed mainly on Congolese civilians. FDLR fighters were estimated to number some 3,000 in 2010. Their strength is thought to have decreased since then.

NATIONAL LIBERATION FORCES (FNL): A Burundian rebel group that once again took up arms against the Bujumbura government after the 2010 elections that were boycotted by the opposition. Part of the FNL uses DRC's South Kivu province as a fallback base.

ECUMENICAL FORCES FOR THE LIBERATION OF CONGO (FOLC): Backed by former rebel leader turned former DRC interior minister Antipas Mbusa Nyamwisi. Active in the northern part of North Kivu. Thought to have agreed to lay down its arms earlier this year.

MAI MAI AND ASSIMILATED GROUPS: There are at least 20 Mai Mai factions. They are present in North and South Kivu, as well as in other regions, notably Katanga. Some of the groups number fewer than 100 and team up with other groups when they need to fight; others number more than 1,000.

NYATURA: Evolved from the former Mai Mai group Pareco, or Resistant Congolese Patriots. Many of the fighters integrated into the DRC army in 2009, but the remainder continue to fight, notably against the M23.

ALLIANCE OF PATRIOTS FOR A FREE AND SOVERIGN CONGO (APCLS): Group based in Masisi in North Kivu. Represents the interests of the Hunde people and fights groups made up mainly of Kinyarwanda speakers, chiefly the M23.

Both Nyatura and APCLS fought against the M23 in November 2012.

MAI MAI KIFUAFUA: Also operates in the Walikale area. Its fighters are drawn from the Tembo ethnic group.

RAIA MUTOMBOKI: Described by the Rift Valley think tank as a "franchise built around an idea -- defending the local population against predation", especially the FDLR. The movement, which has four main factions, reappeared in 2011. Its fighters carry out attacks against the FDLR and their families and against other Kinyarwanda-speaking communities. The movement, whose name translates as "angry citizens" is active in both North and South Kivu.

In all in the Kivus, at least several dozen groups operate, some of them split into factions.

Other armed groups operate elsewhere in the country, including in Ituri, a region that lies to the north of North Kivu, and in the southern mining province of Katanga.
Posted by Thinking Africa at 11:59